How to Protect Your Retail Store from Smash and Grab Crime Retail smash and grab crime has become a $100 billion problem. The sort that could lead to store closures, cost people their jobs, and have a resounding economic impact on communities across the country.

With these crimes continuing to escalate, a renewed focus is placed on the various options available for retail theft prevention. True, there is no single, absolute answer that will effectively end loss prevention worries; as long as retailers exist, so will people who steal from them and the approach to curbing loss must be multi-faceted.

However, as it relates to smash and grab, one of the most effective means of fighting retail theft is stopping robbers from being able to do any smashing and grabbing. That is where solutions like CaseShield come in.

Smash and grab crimes have traditionally been depicted as a loner busting through a storefront window to seize whatever they can before making a fast getaway. The rise in smash and grab incidents since 2019, however, is attributed less to the lone wolf and more to organized retail theft.

What does organized smash and grab look like? These groups are often comprised of people who are coordinating robberies likely through text message and social media. They are exchanging information, discussing which goods are the most valuable, and coordinating their plan of attack.

Afterward, the stolen merchandise is sold for a considerable profit, again aided by the anonymity of the internet. Once upon a time, eBay was the only major online hub where goods could be purchased from individuals as well as companies. This is not the case any longer. Online merchants make it easy for stolen goods to be sold and distributed to often unsuspecting customers.

The truly tricky issue—there are millions of legitimate third-party sellers. Prevention and apprehension are not as easy as scoping out suspicious sites. These are goods that could end up on sites like Amazon.

The attacks themselves are not lengthy and are often committed by large groups (one as large as 80 people). Since the target is typically a retailer with high-value items, thousands of dollars in merchandise disappear within seconds.

There are also security concerns. These smash and grabs are not always happening after-hours, but sometimes happen when the store is open, and employees and customers are on the premises. An 83-year-old Home Depot employee based in North Carolina died from injuries sustained in early December after being shoved to the ground by one of the thieves as they left the premises. In West Virginia, a woman was injured by a man who was attempting to evade capture for shoplifting. She was eventually awarded approximately $17 million in damages.

With an effort this large and coordinated, thieves are not sticking solely to storefronts. They are swarming the retailers, which positions them to put others in harm’s way. In the case of a jewelry store smash and grab, for instance, the more valuable merchandise is not likely to be displayed in the front.

This puts retailers in a position of not only needing to ensure their glass is reinforced at the vulnerable entry points through solutions. For these, solutions such as DefenseLite® retrofit security glazing, which is installed over existing windows and doors to prevent entry, and BulletShield®, a polycarbonate shield that provides impressive, cost-effective ballistic resistance, are very effective.

However, they do not address the issue of security throughout the store itself when the doors are already open, and people can come and go as they please.

There are a few options to consider when buffering a store’s existing security structure. One is replacing the glass in existing display cases with impact-resistant laminated glass. However, this solution can be quite expensive, with the labor cost of removing and installing, as well as the cost of new material.

Likewise, the framing structure of most display cases is not designed to accommodate thicker glass or polycarbonate. This is what makes CaseShield such a beneficial solution. It is not a replacement, but rather a reinforcement. CaseShield is a customizable polycarbonate retrofit glazing system that can be fitted to most any glass display, counter, or case, with a surface 250x the strength of glass. This provides an ostensible “shield” between valuable merchandise and potential assailants.

The CaseShield framing is held in place by a patent-pending security anchoring system, bypassing concerns about fitting thicker glass into existing display cases. This framing can be customized to match any metal or wood decorative trim as well, making it virtually invisible so as not to make customers feel uneasy.

Smash and grabs are hardly the only type of crime retailers face. Organized retail theft is impacting businesses in so many ways, and as we already said, there are no magical solutions to curb theft across the board.

However, as organized retail theft continues to escalate, solutions like DefenseLite and CaseShield provide a robust line of defense for both the merchandise and people within the store itself. Robbers who cannot access the merchandise will want to spend even less time on the premises, minimizing the risk for everyone inside while preventing potentially thousands of dollars in losses.

To learn more about CaseShield or to request a free threat level assessment, contact a dealer near you. 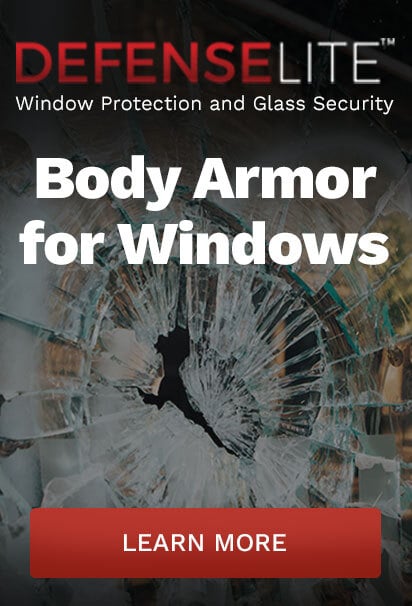